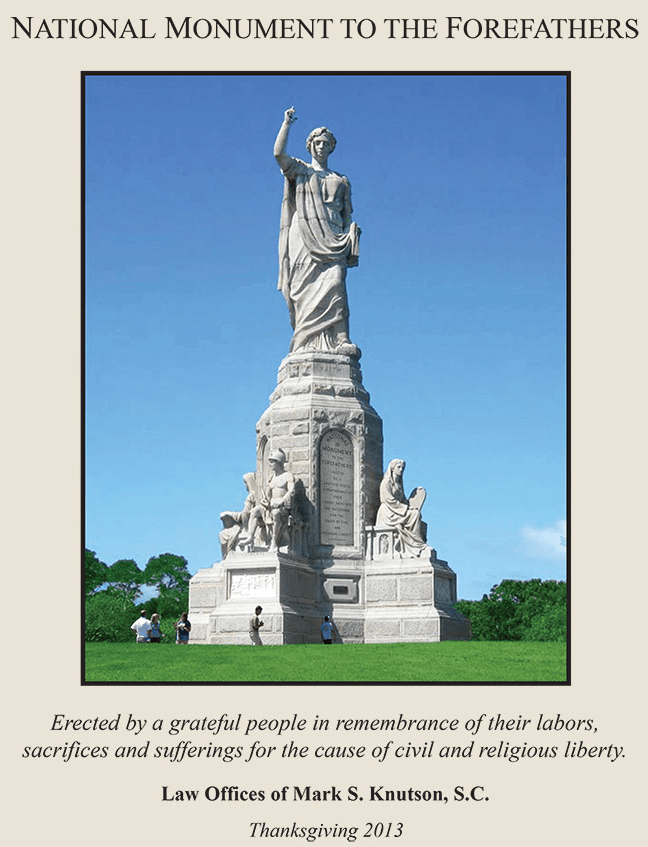 They were a group accustomed to hardships.

Imprisoned in their native country because of their beliefs, they fled their homeland when first possible. Treacherous weather conditions caused them to set sail without their wives and families. The hostile king they fled sent agents to hunt them down even in the foreign country where they lived in exile. When they set sail in search of freedom a second time, one of their two ships was forced to turn back. This led to severe overcrowding on the only ship that remained, a frail craft built primarily to transport wine short distances, not to transport more than a hundred people across a vast ocean.

When the group finally arrived, they discovered that poor navigation had caused them to miss their intended destination by a great distance. That winter, half their adult population died from exposure, malnutrition, and illness. Most of the women died trying to protect their children from the bitter cold. The survivors were forced to bury their loved ones in a mass grave so that the Indians would not realize just how many had perished. Against all odds, they forged a colony that survived the rigors of persecution, separation, disease, isolation, and hunger because they believed in something greater than themselves.

We are, of course, speaking of the Pilgrims.

Actor and Director, Kirk Cameron, has made a remarkable documentary called, Monumental (www.monumentalmovie.com). The film recounts the Pilgrims’ indomitable determination to forge a new life of freedom in a new world. Cameron was motivated to undertake such a project out of concern for his four children. Finding himself deeply distressed at the direction of a society his children would soon inherit, he asked the question “Is there anything I can do to ensure a better future for my loved ones?” This gnawing issue led him on a quest to understand the true origins of our nation.

Monumental documents Cameron’s fascinating journey back to England and Holland and ultimately to the shores of the Massachusetts Bay Colony, in which he seeks to tell the deeper story of the brave and unusually insightful people we call the “Pilgrims.”

The movie unexpectedly ends at the feet of an imposing granite monument that few Americans even know exists. There, within sight of the Atlantic Ocean, the monument towers above the tree line of a quiet residential neighborhood in modern-day Plymouth Bay, Massachusetts. Called “National Monument to the Forefathers”, it bears silent chiseled witness to the four vital pillars of the American experiment in freedom and self-determination that is the legacy of the Pilgrims. Made of Maine granite, the cornerstone to the imposing figure was laid down on August 1, 1859, just months before the outbreak of the Civil War. Following the commencement of hostilities in 1860 and the resulting lack of funds, the statue had to be downsized. Ultimately, construction was not completed until thirty years later. The monument was finally dedicated on August 1, 1889, and stands a soaring eighty-one feet above the ground, weighing in at over 180 tons. The true gravitas of the statue is not to be found in its carefully sculpted design or even in its historic location, but rather, in the message, it solemnly bears for future generations.

As one article describes, “Towering high in its majestic splendor, the central figure of the monument is Faith. She stands upon the main pedestal, one foot resting upon a replica of Plymouth Rock, and holds an open Bible in her left hand. Her right-hand points heavenward…four smaller, seated figures represent the Christian values and principles promulgated by the Pilgrims themselves.” In the documentary, a historian explains, one by one, these four figures seated at the base of the statue.

The first of these figures seated at the feet of Faith is named Morality Morality holds the Ten Commandments in one hand and the Book of Revelation in the other. Without Morality, where does the knowledge of the difference between right and wrong come from?

The second figure is named Law. Law has Justice in one hand and Mercy in the other. Where do the concepts of justice and mercy find their origins? The Pilgrims believed that law finds its origins, not in the will of the majority, but in the revealed and timeless truth of the Scriptures.

The third figure on the monument is named Education. The need for parents to educate the next generation, to provide wisdom, and to serve as role models, was a concept well understood by the Pilgrims.

The final figure, known as Liberty, is accompanied by a depiction of Peace and of the overthrow of Tyranny. The Pilgrims understood that the true source of liberty is from God, not man. For if God grants you liberty, it is yours for all time. But if man grants you liberty, he can also take it from you.

The “National Monument to the Forefathers” may truly be our most abiding national treasure. It contains the simple blueprint that helped to create the most prosperous, free, and enduring republic in the history of the world, the United States of America. Kirk Cameron, standing beneath the shadow of this monument, leaves us with an intriguing thought. Could these four virtues be the roadmap our forefathers left to future generations to help guide us back if we were ever to lose our way?

This Thanksgiving season, we give thanks for the faith, wisdom, and courage of the Pilgrims as embodied in the “National Monument to the Forefathers.”