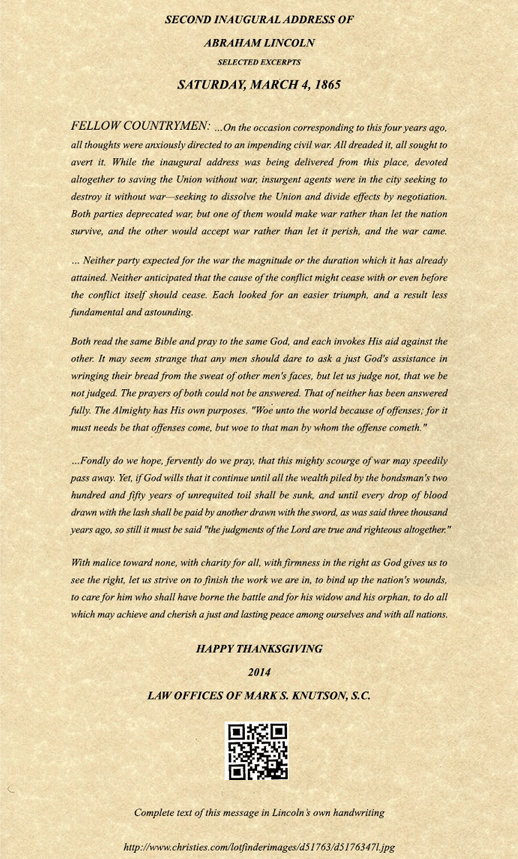 “It should be the object of all to avoid controversy, to allay passion, give full scope to reason, and to every kindly feeling.”

“With malice toward none, with charity for all, with firmness in the right as God gives us to see the right, let us strive on to finish the work we are in, to bind up the nation’s wounds…”

These two sentences sound as if they were spoken by the same person, but they were not. In fact, they were written by two opposing leaders of the greatest conflict this nation has ever faced—the Civil War. The first was penned by Confederate General Robert E. Lee in a letter after the war to a magazine editor, and the latter spoken by President Abraham Lincoln during his Second Inaugural Address on March 4, 1865.

This year marks the 150th anniversary of the final year of the War Between the States. It should remind us afresh of the timeless wisdom of voices that urge us to forgive one another, reconcile differences, and unite as a nation once again.

Looking from our privileged vantage point a century and a half later, it is easy to assume that the war had to end the way it did. After all, the beleaguered and starving armies of the Confederacy finally had to capitulate to the well-supplied and superior numbers of the North. And the stately, well-mannered tactician of the South, Robert E. Lee, had to eventually admit he was hopelessly outnumbered and surrounded by the persistent, shrewd General of the North, Ulysses S. Grant. Yet, in that final year of the war, had either side’s leaders ultimately decided to walk a less noble, less conciliatory, and less unselfish road than they did, the outcome could have altered the destiny of our nation. It is no exaggeration to say there might not be a United States of America today.

To begin with, it was not certain that in 1864 the magnanimous Abraham Lincoln would be re-elected. Though he had bravely led the nation through three years of horrific battles, the nation was growing weary of the never-ending list of casualties. Many were pushing for a negotiated settlement to the war. In fact, Lincoln’s main opponent in the election of 1864, his former General, George McClellan, openly campaigned for an immediate and diplomatic end to the hostilities. Had Lincoln lost his bid for a second term and McClellan won, it likely would have resulted not only in the permanent division into two separate countries but also allowed the inhumane practice of slavery to remain intact at that time.

Yet, as Providence would have it, neither of these sad outcomes would occur.

In the summer of 1864, Union General William T. Sherman embarked on his bold plan to take the war to the heart of the Confederacy. He intended to divide the South and thus deny it the economic, transportation, and industrial means to continue the war. His infamous March to the Sea with 61,000 soldiers took him first to Atlanta, then later to Savannah, Georgia, and finally up through both South and North Carolina. As his ravaging armies neared the panicked Atlanta, the retreating Southern forces set fire to it so as to deny him further supplies, food, or ammunition. When Atlanta fell to Sherman the tide of presidential politics in the North was dramatically altered.

Thereafter, Lincoln was re-elected 150 years ago this month. His desire to one day graciously, sincerely, and without malice welcome, the Southern states back was set in motion—a decision that resulted in our becoming the United States of America rather than simply a restored union of states.

The other dramatic development of the final year of the war that allowed our nation to begin healing was the decision of General Robert E. Lee to surrender his armies rather than continue a sustained guerilla war. Even after his surrender at the Appomattox Courthouse in April 1865, there were still tens of thousands of Confederate soldiers deployed in the field. They were willing to continue the fight in North Carolina, Texas, and other parts throughout the South—for years if need be.

The only man who could prevent such a calamity from happening was General Lee, and he did. Though junior officers begged to wage guerilla war, he refused the idea outright. One historian sums up his decision, “We did what we could, we lost, let’s look to the future and rebuild.” Lee’s unselfish and noble desire to put the wounds of the past behind and strive for national conciliation helped bring America’s dark night of destruction to a final and merciful end.

As we come to this Thanksgiving let us give thanks that we live today in a United, not divided, States of America. And though we may hold certain values dear to us with great passion and conviction, let us remember the wisdom of a generation past. Once the great moral and ethical conflicts of the day were decided, they chose to forgive, heal, and unite as a people once again. Indeed, as the Scriptures remind us, “How good and pleasant it is when brothers dwell together in unity,” (Psalm 133:1) and, as Lincoln often quoted Jesus, “If a house is divided against itself, it cannot stand.” (Mark 3:25)