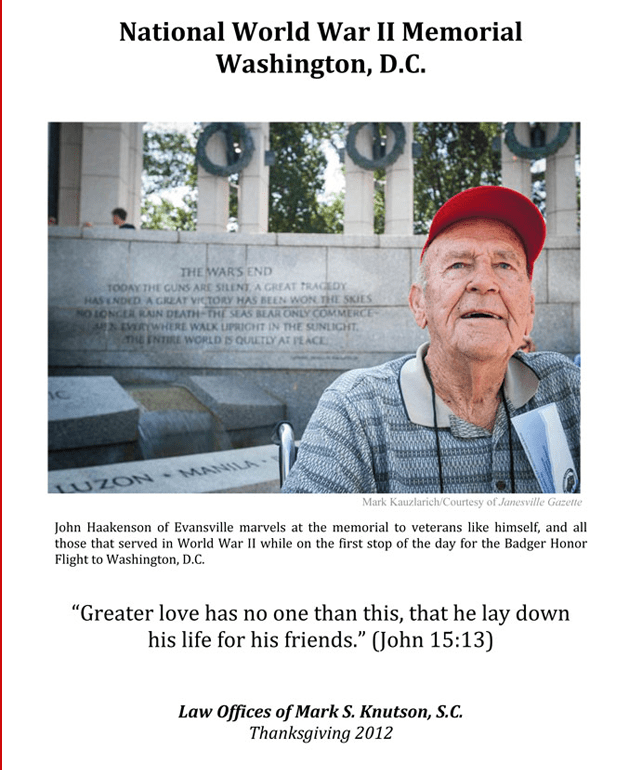 America –“The land of the free and the home of the brave.” At one time or another, all of us have heard our great land described in those terms. Recently, we were all bombarded with each candidate’s view of what that looks like. In the process, I’m afraid, all too many lost sights of an important reality…

Freedom is not free.

That simple truth is inscribed in stone at the entrance to the World War II Memorial in Washington, D.C. Completed in 2004, this stunning memorial of bold granite columns and gracefully arching fountains is one of the latest additions to monuments in our Nation’s Capital.

Yet, this memorial was very late in coming. By the time of its opening, the vast majority of World War II veterans were now in their 80s and 90s. By then, these veterans were leaving us at the rate of nearly 1,000 per day. Retired Air Force Captain Earl Morse was working at that time with the Department of Veterans Affairs in Springfield, Ohio. He interacted daily with large numbers of World War II veterans and out of curiosity asked them, “Do you intend to visit the Memorial?” The overwhelming answer was “Yes!”.

However, six months later, none of those Morse talked with had made the journey. “Three hundred of them and yet no one had been to see it. Reality set in,” he recalls, “they were never going.”1

When Morse volunteered to go with them at his own expense to the new memorial, several of them broke down and wept. He then pitched an idea to a local flying club of 300 pilots – what if they helped pay for these veterans to fly to Washington and personally escorted them to the World War II Memorial? Eleven pilots signed on and a new movement was born – The Honor Flight Network. Now, seven years later, literally, thousands upon thousands of veterans have made this remarkable journey of a lifetime.

Julian Plaster was one such veteran flown to Washington, D.C. This Wisconsin native was a cook in the Navy stationed in the South Pacific during February 1944. One fateful day, a swarm of Japanese fighters suddenly appeared and strafed the island. The ammunition dump exploded in a furious ball of fire. “There were six of us in my tent and the next day there were three,” he recalls with emotion. “When you have to bury your friends it stays with you.”2

Morse was just one of several veterans featured last summer in a film shown at Miller Park in Milwaukee honoring our veterans entitled, “Field of Honor: A Salute to the Greatest Generation.” Dan Hayes, the producer of the documentary, remembers filming another Wisconsin veteran who made the Honor Flight. Standing at the memorial he looked at Hayes and said, “I can die a happy man now that I’ve made this trip.”3

Despite the enormous sacrifices and lasting scars these heroes endured, they arrived home to a strangely silent welcome. Very few veterans were ever publicly thanked for their service. One Army pilot recalls his return home to the United States at war’s end. When his son asked if there were any parades or ceremonies held in his honor he said, “Heck, no. The day I got home I simply hung up my uniform in a closet and went to look for a job. That was it.” The only public ceremony he would be invited to attend was a Sunday morning church service where he was asked by the pastor to stand and read the names of fallen comrades from his small town. Those names included friends he had known from his high school graduating class.

His experience helps explain why The Honor Flight Network’s program has become such a great success – it closes an aching and unnecessary gap left open for almost seven decades.

America owes a great debt of gratitude toward all our veterans – not just those of World War II. In each generation, brave men and women have stepped forward to put their lives on the line to preserve our freedom and way of life. Whether in the frozen mountains of South Korea, or the steaming jungles of Vietnam, or the dry sands of Iraq or in the deep ravines of Afghanistan, Americans have demonstrated time and again the truth of “America the Beautiful,” O beautiful for heroes proved, in liberating strife. Who more than self their country loved, and mercy more than life!

So let us pause this Thanksgiving to remember with deep gratitude and reverence those who have given us so much and asked so little – America’s brave men and women in uniform. Their lives continue to echo the profound truth Jesus exemplified, “Greater love has no one than this, that he lay down his life for his friends (John 15:13).”

We encourage you to take time, before this season ends, to express your appreciation to a veteran or their family for they have taught us all an important lesson…

Freedom is not free.