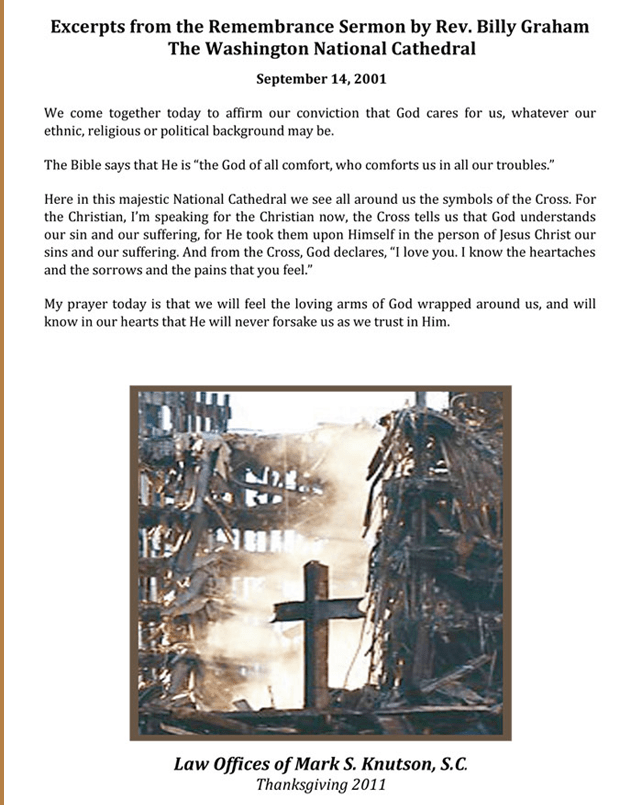 Just two days after the horrendous events of 9/11 at the World Trade Center in New York City, a construction worker approached a Catholic priest standing among the smoking ruins, “Father, do you want to see God’s house?” he asked. “Look over there.”*

Father Brian Jordan squinted across the tons of twisted rubble and replied, “What am I looking for?” “Just keep looking, Father, and see what you see.”

The priest suddenly gasped, “Oh my, I see it.” The 17 ft. long crossbeam left standing amidst the twisted steel and drifting smoke at an oddly vertical angle was, of all things, across.

This site immediately became a place of impromptu prayer and reflection for dozens first, then hundreds, who gathered there. Surrounded by the ugly charred symbols of the worst humans can do to one another, it stood as a powerful reminder that God was right there in our midst on that fateful day.

“Father, they might put this in some dump heap,” the construction worker said the day of the great discovery.

“No, no, they will not,” was the priest’s resolute reply. He was right.

Throughout the ages, many have attempted to consign the cross to the ash heap of history. None have succeeded. Recently, some atheist groups have demanded that the cross found at Ground Zero be removed from any memorial to the fallen victims. They claim it violates the constitutionally guaranteed wall of separation between church and state.

We maintain their position is a clear misinterpretation of our nation’s cultural, legal, and religious history. The Founding Fathers envisioned an America with freedom of religion rather than freedom from religion. The term “wall of separation between church and state” appears neither in the Declaration of Independence nor in the Constitution. It first appeared well over a decade later, I a private letter written by Thomas Jefferson to a group of concerned clergy in Danbury, Connecticut.

Jefferson’s intent was not to warn New England pastors to keep any reference to God out of the realm of public life. He firmly believed in their right to openly practice religion, a right emanating from an authority higher than the federal government. On the third panel of the Jefferson Memorial in Washington, D.C. are engraved the words, “God who gave us life gave us liberty. Can the liberties of a nation be secure when we have removed a conviction that these liberties are the gift of God?” **

Back to the cross found at Ground Zero, even members of other faith groups have recognized its vital role in providing healing and consolation to the grief-stricken survivors of 9/11. Rich Shirer, New York’s Director of Emergency Management at the time of 9/11, acknowledged the enduring legacy of this amazing symbol when he said, “Intellectually, you know it’s just a piece of steel, but you saw the impact it had on so many people, and you knew it was more than just steel.”

For Christians, the cross has had deep and transcendent meaning for nearly 2,000 years. Though once employed by the ancient Romans as their most vile and humiliating means of execution, the early Christians embraced it as their central symbol of sacrificial love, divine forgiveness, and human redemption. The same is true today.

On September 14, 2001, just three days after the attack on the World Trade Center, The Reverend Billy Graham spoke of the power of the cross to bring hope and healing to the nation in his address at the National Cathedral in Washington, D.C. Among his comments he noted:

Here in this majestic National Cathedral, we see all around us the symbols of the cross. He went on to say …the cross tells us that God understands our sin and our suffering.

And from the cross, God declares “I love you. I know the heartaches and the sorrows and the pains that you feel.”

We hope during this Thanksgiving, whatever your faith background may be, the cross will become more to you than just steel. During these times of high unemployment, foreclosures; divisive partisan politics, and other difficulties, let us be thankful for this reminder of His love, forgiveness, and redemption that brings us comfort and peace.