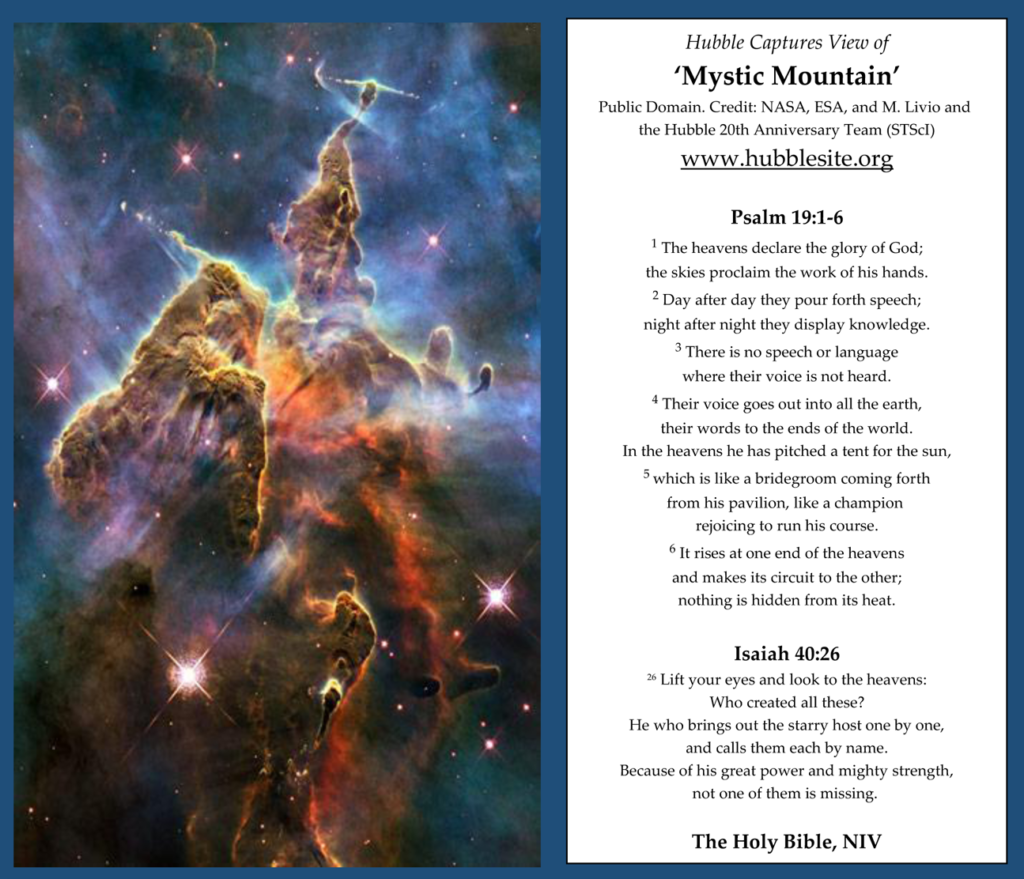 It was 20 years ago this year that a low-orbit telescope was launched from the earth by Space Shuttle Mission STS-31. At the time there were modest hopes that a new telescope operating outside the confines of earth’s atmosphere would offer us a slightly better view of the cosmos and what lay beyond.

Not only did this untested telescope orbiting at 17,500 miles an hour above the earth meet the expectations of the scientific community – it would be safe to say on the 20th anniversary of this epic accomplishment of space exploration the results have been nothing less than astonishing. Consider the unprecedented accomplishments of the Hubble telescope contained in a NASA news release:

Yet, far above and beyond the technical achievements of this enduring space achievement, has been the enduring impact of the Hubble telescope on the hearts and minds of the scientific community and the public at large. It is impossible to look at the stunning stellar images of stars coming into existence and galaxies being birthed before our eyes without asking deep and searching questions of the soul.

The spiritual issues raised by the revelations of space exploration were once articulated by Wernher Von Braun (1912-1977), considered by many to be the father of the American space program. In his monumental work, Anthology on the Creation and Design Exhibited in Nature he makes this profound observation, “An outlook through this peephole at the vast mysteries of the universe should only confirm our belief in the certainty of its Creator. I find it as difficult to understand a scientist who does not acknowledge the presence of a superior rationality behind the existence of the universe as it is to comprehend a theologian who would deny the advance of science.”

Indeed, the Scriptures teach that the magnificent expanses of the heavenly bodies are the work of an all-powerful, all-loving Creator, “Lift up your eyes and look to the heavens: Who created all these? He who brings out the starry host one by one and calls forth each of them by name.” (Isaiah 40:26)

Can we possibly comprehend the power and wisdom of a Creator that can call each of the nearly infinite numbers of stars by name?

To put this question in perspective, consider the galactic image released by NASA in celebration of the 20th anniversary of the launch of the Hubble telescope. The breathtaking picture comes from a galaxy some 7,500 light-years away from earth and has been nicknamed, “Mystic Mountain.” According to the news release, “This turbulent cosmic pinnacle lies within a tempestuous stellar nursery called the Carina Nebula…Scorching radiation and fast winds (streams of charged particles) from super-hot newborn stars in the nebula are shaping and compressing the pillar, causing new stars to form within it.”2

Imagine, God knows the names of all the stars emerging from Mystic Mountain though the galaxy is some 7,500 light-years from earth (just one light-year is5,865,696,000,000 miles in length). It is this same God Who has created our world and all the wonders it contains – a God both so magnificent He transcends our understanding and Who at the same time so close to us that His presence is with us at all times and at all places.

The apostle Paul once explained the wonder of both God’s transcendence and His closeness to a group of assembled philosophers in ancient Athens, “The God who made the world and everything in it is the Lord of heaven and earth and does not live in temples built by human hands…God did this so that they would seek him and perhaps reach out for him and find him, though he is not far from any one of us. ‘For in him we live and move and have our being.’” (Acts 17:25-28)

This Thanksgiving we believe it’s appropriate to give thanks to the God of Creation – the same God who set in motion the creation of the galactic Mystic Mountain is the same God Who provides daily for all our earthly needs. Paul explains elsewhere that the Creator of this astonishing universe has a Name, “The Son (Jesus Christ) is the image of the invisible God, the firstborn over all creation. For in Him all things were created: things in heaven and on earth, visible and invisible… He is before all things, and in him, all things hold together.” (Colossians1:15-17)

This Thanksgiving please join us in celebrating and expressing our gratitude to the Creator for all the marvels of Creation given to us to enjoy. As an aid in giving thanks please accept as our gift the stunning color and imagery of NASA’s image of the galactic “Mystic Mountain.” May it remind us throughout the coming year of the loving presence of the infinite Creator who sustains and gives life to us all.

Have a Blessed Thanksgiving,