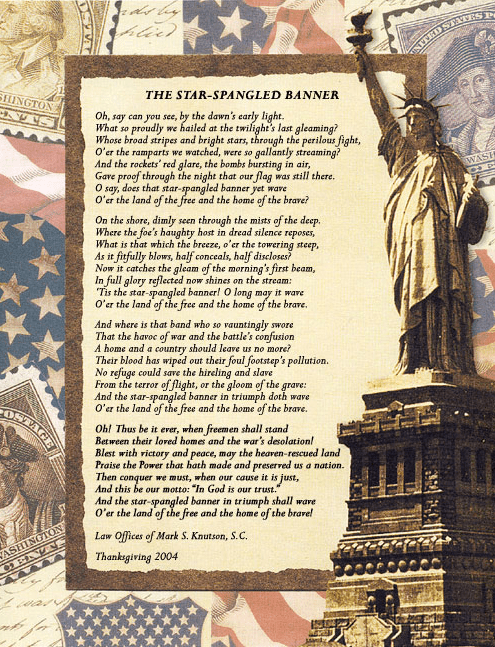 As we come to this season of Thanksgiving, we give thanks that we live in the land of the free and the home of the brave. These words are, of course, so familiar to us because they are taken from the final line of our national anthem, The Star-Spangled Banner. These words have taken on a new sense of conviction and pride in our nation since the tragic events of September 11, 2001, and the wars in Afghanistan and Iraq that followed.

Did you know that our national anthem was written during a similar period in history when America was under direct attack? During the War of 1812, the British attempted to regain control of the United States by invading our nation. The enemy actually took over our nation’s capital and burned the White House to the ground. Had it not been for the heroic efforts of Dolly Madison, the wife of President James Madison, many of our most treasured national documents, such as the Declaration of Independence, would have been lost in the blaze. During that attack, Dr. William Beanes, an elderly physician, was captured by the British and accused of harboring British deserters in his home.

In September 1814, a young lawyer and amateur poet, Francis Scott Key, under orders from President Madison, set sail from Baltimore Harbor under a flag of truce. His goal was to secure the release of Dr. Beanes from his British captors. Key and another American representative, John Skinner, were allowed to board the enemy flagship anchored in the Chesapeake Bay.

Over dinner with British General Robert Ross and Admiral Alexander Cochrane, Key and Skinner advocated for Beanes’ release. The British officers refused to release the captured American physician until Key produced handwritten letters from several wounded British soldiers who praised Dr. Beanes and the Americans for their kind treatment. However, the story does not end there.

Because Key and his associate overheard much of the British plans for the attack on Fort McHenry, they were detained for several more days until the attack was over. Key watched with an anxious heart as the 25-hour naval bombardment of Fort McHenry began. Withering fire from countless British ships bombarded the beleaguered fort all day and all night. As Key stood watching the “rockets’ red glare and the bombs bursting in air,” he knew all too well the fate of America hung in the balance. Would this direct attack on America succeed?

To his overwhelming joy and relief, the “dawn’s early light” revealed a giant red, white, blue, and star-spangled banner still waving over Fort McHenry. Key, deeply moved by the knowledge that

America had survived this terrible onslaught, pulled an envelope out of his coat pocket, and wrote, “our flag was still there.”

Francis Scott Key could never have imagined that his words would one day be sung by tens of millions of freedom-loving Americans. In 1916, President Woodrow Wilson ordered that it be performed at military events. Two years later, in 1918, at a time when America was again at
war, it was sung for the first time during the inning stretch of the World Series. Finally, in
March of 1931, Congress established it as our national anthem.

Did you know there are more stanzas to the national anthem Key wrote than just the one we sing at the opening of a baseball game? Let us share with you portions of several verses you likely have never heard from this great national treasure:

And where is that band who so vauntingly swore
That the havoc of war and the battle’s confusion,
A home and a country should leave us no more!

The verse has an amazingly contemporary feel, doesn’t it? Where today are those who boasted they could destroy our homes and our country? Where are those who proclaimed America would crumble under the onslaught of attack and terror? As Keynotes, they were wrong in
1814, and we know in 2004 they are still wrong. He goes on to give credit not only to the gallant soldiers who defended Fort McHenry but to God whose hand had preserved our nation from defeat:

Oh! Thus be it ever, when freemen shall stand
Between their loved home and the war’s desolation!
Blest with victory and peace, may the heaven-rescued land
Praise the Power that hath made and preserved us as a nation.

We believe it is important now, 190 years later, for us to continue to “Praise the Power that hath made and preserved us as a nation.” Let us during this season give thanks to our God who has granted us this “heaven rescued land.” Let us stop and take stock of all the countless ways we have been blessed, protected, and have prospered by the hand of the Lord in our individual lives and families.

We are so thankful for each of you who we know and treasure as friends, colleagues, and clients. It has been our privilege to serve you and hopefully encourages you, during both the joyous and more difficult seasons of life.

We find great comfort in the final words of the last stanza of Francis Scott Key’s poem:

Then conquer we must, when our cause it is just,
And this is our motto: “In God is our trust.”

This sentiment offers us the same assurance in the 21st century as it did our forefathers of the 19th century.