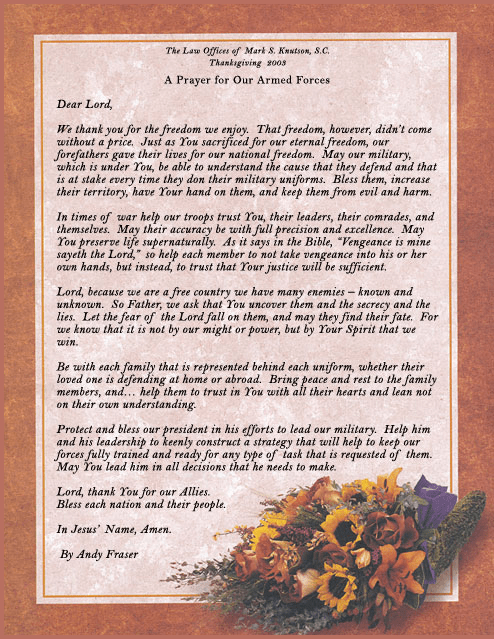 In 1803, President Thomas Jefferson completed the Louisiana Purchase and commissioned the Lewis & Clark expedition to explore our newly acquired territory, which doubled the size of our country. Jefferson’s vision created a land of liberty that stretched from sea to shining sea. This year, we celebrate the bi-centennial of those events. The bestseller, Undaunted Courage, written by Wisconsin native, Stephen E. Ambrose, chronicled the adventures of the two American soldiers, Meriwether Lewis and William Clark, as they led America’s journey to the Pacific Ocean.

As we approach our national day of Thanksgiving, we are thankful for the undaunted courage of our Armed Forces around the world. Their bravery in foreign lands is made possible by the sacrifices of their loved ones here who pray for their safety and await their return.

During the season of the year when we focus on our American heritage, I would like to share some thoughts with you from Charles W. Colson, Chair of Prison Fellowship Ministries, which were inspired by our nation’s first expression of its ideals written by Thomas Jefferson. Hopefully, his thoughts help put our nation’s debate about the direction of our Armed Forces into perspective.

Alone among the great nations of the world, Americans define their identity outside the boundaries of geography or common ethnic ancestry. For us there is no fatherland … We are instead a people who have come from every comer of the globe, most of us in the last century, and all of us in pursuit of a noblest and remarkable vision – that in this land men and women could live in freedom and liberty with their God-given rights respected.

It is, therefore, a common creed, not common ancestral roots, which binds us together. That creed was best expressed in the Declaration of Independence which announced, “We hold these truths to be self-evident, that all men are created equal, that they are endowed by their Creator with certain unalienable Rights, that among these are Life, Liberty and the pursuit of Happiness.” Americans are forever indebted to those who pledged their lives and fortunes and sacred honor to make this experiment in ordered liberty possible…As Americans, we have reason to be filled with gratitude at all times; gratitude to God who gave us the opportunity to come to this land and to live in freedom, gratitude to our Founding Fathers who set forth those principles that constitute our creed, and gratitude to following generations who have defended us…

The history of the past 225 years shows what a difference in loyalty to principled beliefs can make. America has never sought wars of expansion. It has sought to liberate and restore those it has defeated. It has shared its bounty and wealth with the poor. It has rescued suffering. It has done this not because the fatherland orders it, but because of our devotion to human dignity and human liberty demands it. America is different – it is a vision, a noble idea – and for that extraordinary difference, Americans should give thanks to God each day and pledge anew to do their duty out of gratitude to Him and to our Founding Fathers.

At this time of the year when we give thanks for all who have bravely gone before us to secure the liberty we now enjoy, let us also honor the undaunted courage of our countrymen and women in uniform, wherever they serve, by praying for them as they sacrifice to protect liberty around the globe. This year we share with you “A Prayer for Our Armed Forces,” which we will include this Thanksgiving in celebration of our rich American heritage.