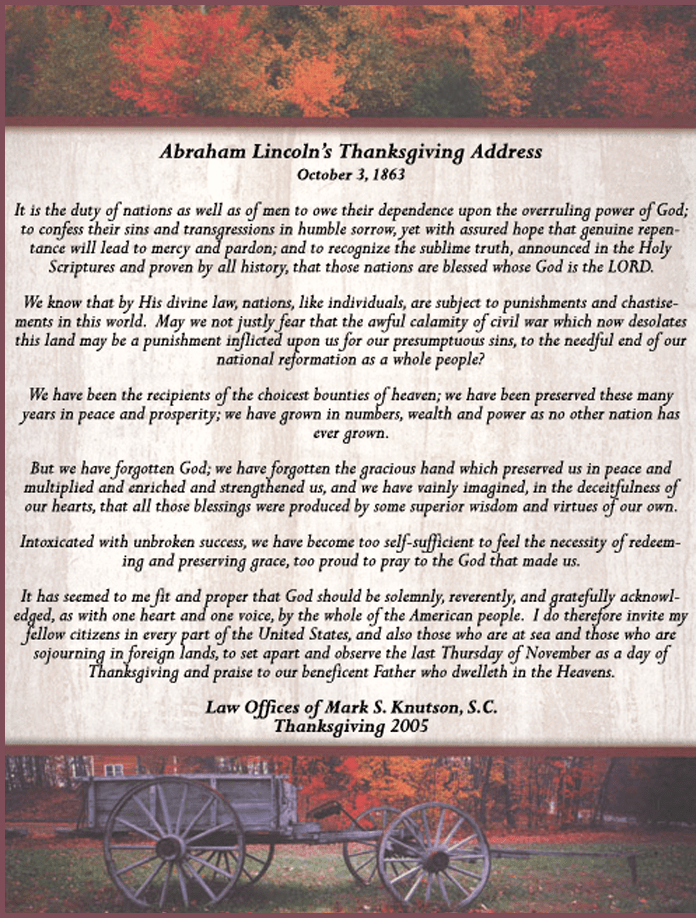 It seems almost impossible to believe that ten years ago this month we sent our first Thanksgiving greeting. At that time, we had no idea this would become a tradition, nor did we realize it would evolve into an annual reminder of our blessed heritage.

In that first letter of 1995, we provided a copy of Abraham Lincoln’s Thanksgiving Address, issued during a time of supreme national trial as the Civil War raged on. Rather than dwelling on the peril and sorrow the nation was experiencing, Lincoln chose to lift up the blessings of Almighty God in his 1863 Thanksgiving Proclamation. Reflect on his beautiful words:

The year that is drawing towards its close has been filled with the blessings of fruitful fields and healthful skies …They are the gracious gifts of the Highest God, who, while dealing with us in anger for our sins, hath nevertheless remembered mercy ...I do therefore invite my fellow-citizens in every part of the United States, and also those who are at sea and those who are sojourning in foreign lands, to set apart and observe the last Thursday of November next, as a day of Thanksgiving and Praise to our beneficent Father who dwelleth in the Heavens.

Lincoln consistently modeled a rare combination of genuine humility and unwavering strength. That is why the Sixteenth President of the United States has often been known as the “Great Emancipator, the “Great Heart,” and the “Great Healer.” We now face a time again in our history where the divisions run deep in our national soul. Instead of “Blue” vs. “Gray”, we now speak of “Red States” and “Blue States.” Whether it is the contested results of presidential elections, the debate over the value of human life, or the decision to go to war, we face issues today remarkably reminiscent of those Lincoln had to address some 140 years ago.

Thanksgiving gives us an opportunity to briefly set aside that which divides us as we come together to give thanks for the blessings we all have in common. This year we offer a question for your consideration, the answer to which could add to our shared blessings in the coming year.

We challenge you with this question: Is it possible for each of us to become a force for reconciliation during such a time of cultural polarization and political division? Abraham Lincoln was able to do so because he combined the character traits of mercy and integrity. After being re-elected to a second term of office in 1864, he delivered one of the greatest speeches of his career at his March 1865 inauguration.

He surprised everyone by noting how much the North and South shared in common in their immense struggle:

Neither party expected for the war the magnitude or the duration which it has already attained. Neither anticipated that the cause of the conflict might cease with or even before the conflict itself should cease. Each looked for an easier triumph, and a result less fundamental and astounding. Both read the same Bible and pray to the same God, and each invokes His aid against the other …The prayers of both could not be answered. That of neither has been answered fully. The Almighty has His own purposes.

Lincoln did something we all ought to do. He sought to find common ground with his opponents whenever and wherever possible. Furthermore, rather than vowing retribution, he chose instead to travel the road of forgiveness. He ended his inaugural address with these words which are now inscribed forever on his monument in Washington D.C.:

With malice toward none; with charity for all; with firmness in the right, as God gives us to see the right, let us strive on to finish the work we are in; to bind up the nation‘s wounds …

Perhaps Lincoln’s heart can serve as an inspiration to us all. He can remind us it is possible as a free people to rise above the conflicts and divisions of the hour. He can help us see it is nobler to seek unity than to perpetuate division. He can model for us that it is possible to combine justice with mercy.

As a symbol of our thanks for the privilege of knowing and working with you this past year, we mark this 10th anniversary by providing a copy of President Lincoln’s Thanksgiving Address, just as we did when this annual Thanksgiving tradition began. We pray that God will bless our land this Thanksgiving season with a new spirit of reconciliation and that He will use all of us as instruments of His peace.