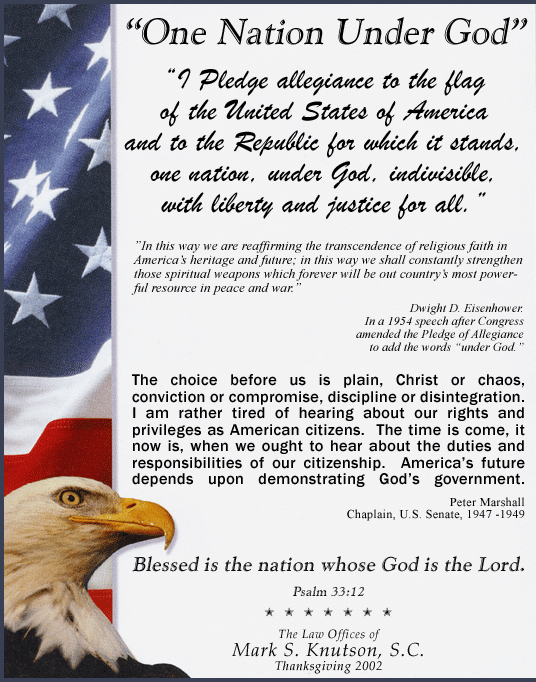 I remember my first grade days in a two-room schoolhouse in New Berlin when the area was still more pasture than the parking lot. Every morning, school started with all of us standing at attention next to our desks, right hands over our hearts, reciting the Pledge of Allegiance. I suspect most of us then knew little about the significance of either our flag or the words we spoke.

Hopefully, in the years since our first days in school, we all have developed an appreciation for Old Glory that reflects what its stars and stripes mean to us. President Calvin Coolidge powerfully described that affection when he said,

“We identify the flag with almost everything we hold dear on earth. It represents our peace and security, our civil and political liberty, our freedom of religious worship, our family, our friends, our home. We see it in the great multitude of blessings, of rights and privileges that make up our country.”

Francis Bellamy, a Baptist minister in Boston wrote the original Pledge of Allegiance in 1892 as part of a school flag-raising ceremony to mark the 400th anniversary of Columbus’s arrival in America. The most significant change in the pledge was the addition of the words, “under God” by an act of Congress in 1954.

Earlier this year, many of us were shocked by the prospect that the words one nation, “under God” should not be part of our Pledge according to a federal appellate court decision. President Bush stated in response to the court ruling, “The declaration of God in the Pledge of Allegiance doesn’t violate rights. As a matter of fact, it’s a confirmation of the fact that we received our rights from God, as proclaimed in our Declaration of independence.” (No one expects the ruling to stand.)

Words spoken by President Grover Cleveland more than 100 years ago describe well the traditions and history of America that President Bush was referring to and which we celebrate this month. Cleveland said, “The American people should every day remember with praise and thanksgiving the divine goodness and mercy which have followed them since their beginning as a nation.” In a few days, we will gather around a dinner table or in a place of worship to give thanks on our national day of Thanksgiving. We would do well to give thanks that we are “one nation under God” because, as the psalmist reminds us, “Blessed is the nation whose God is the Lord.” We at The Law Offices of Mark S. Knutson hope this Thanksgiving greeting will encourage our friends to remember every day, with praise and thanksgiving, the blessings that our flag embodies.