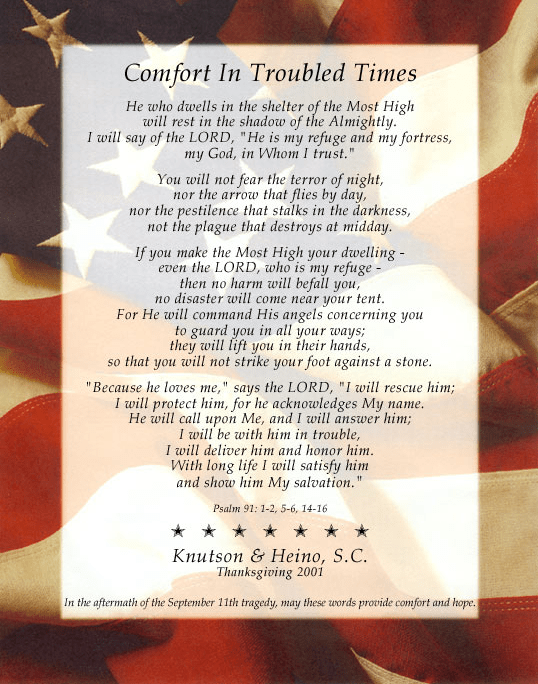 A picture of a soldier, hands clasped, on bended knee in a snowy forest, hangs in our office reception area. This print depicts General George Washington praying at Valley Forge during the Revolutionary War, a desperate time in our country as we fought for freedom and independence.

Washington was probably one of the most outspokenly thankful men of his time. Whether in defeat or triumph, he tempered the experience of the moment with sincere gratitude. Such expression of gratitude even in terrible circumstances was an earmark of his greatness. It seems to have energized, sustained, and healed him.

President Bush, in his September 141h remarks during the National Day of Prayer and Remembrance, reminded us that despite the tragedies of September 11th in New York and Washington, D.C., we have much to be grateful for. He stated:

“America is a nation full of good fortune, with so much to be grateful for. But we are not spared suffering. In every generation, the world has produced enemies of human freedom. They have attacked America because we are freedom’s home and defender. And the commitment of our fathers is now the calling of our time.”

The September 11th attacks starkly remind all of us that we live in a world that is not free of danger. Psalm 91 reassuringly informs us that God promises His help whenever danger confronts us. We at Knutson & Heino hope that this Psalm’s comforting words, which we encourage you to share with a friend, will help you to remember God’s promises of provision and protection in this season of giving thanks.

As we gather with family and friends this Thanksgiving, may we be energized, sustained and healed by gratitude that reflects trust in our Lord’s promise and protection.