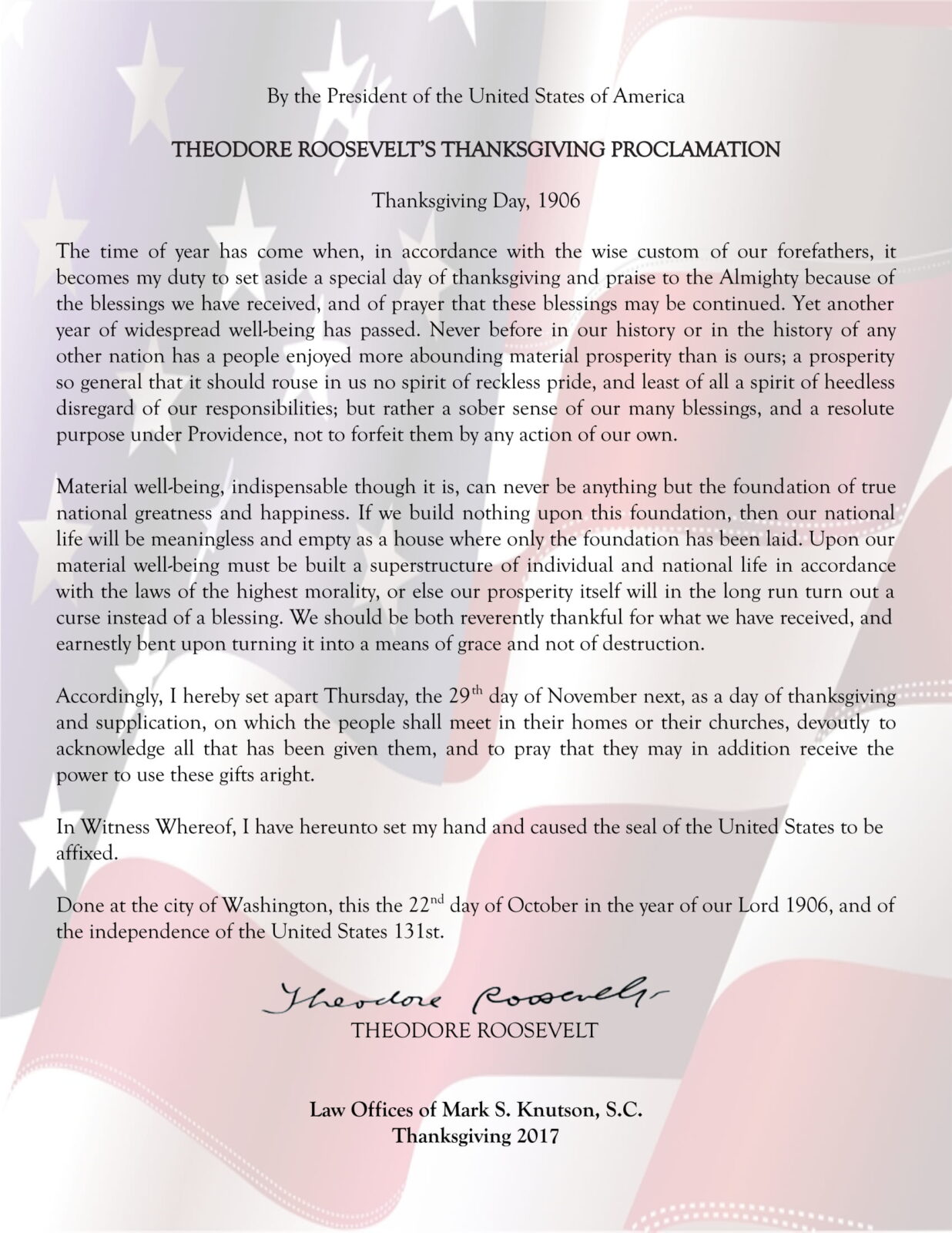 For the past 22 years, we have been sharing pieces of our American heritage with you so that it may enrich your season of Thanksgiving.  This is our 23rd edition. But this 23-year tradition pales in comparison to the Thanksgiving custom of our American presidents.  George Washington began the tradition on October 3, 1789, when he issued the first Presidential Thanksgiving Proclamation, reminding his countrymen, “WHEREAS, it is the duty of all nations to acknowledge the providence of Almighty God, to obey His will, to be grateful for His benefits, and humbly to implore His protection and favor…”

The Merriam-Webster dictionary defines “providence” as “divine guidance or care.”  When capitalized, it defines “Providence” as “God conceived as the power sustaining and guiding human destiny.”

The presidential custom of issuing a Thanksgiving Proclamation was renewed by our 16th president, Abraham Lincoln when the United States of America was at war with itself. On October 3, 1863, in the third autumn of the Civil War, President Lincoln proclaimed:

“I do therefore invite my fellow-citizens in every part of the United States…to set apart and observe the last Thursday of November next, as a day of Thanksgiving and Praise to our beneficent Father who dwelleth in the Heavens.  And I recommend to them that while offering up the ascriptions justly due to Him…they do also, with humble penitence for our national perverseness and disobedience, commend to His tender care all those who have become widows, orphans, mourners or sufferers in the lamentable civil strife in which we are unavoidably engaged, and fervently implore the interposition of the Almighty Hand to heal the wounds of the nation and to restore it as soon as may be consistent with Divine purposes to the full enjoyment of peace, harmony, tranquility, and Union.”

Those proclamations often referred to “Providence” as being woven into the fabric of our country’s founding and growth, but others believe our nation’s story is simply the product of a remarkable series of coincidences that happened to work in our favor.

Consider the experience of the Pilgrims. On March 16, 1621, they emerged from the terrible sufferings of their first winter in North America. Nearly half of the original 107 settlers succumbed to cold, hunger, or disease. Losses left them vulnerable to Indian attack. So, on that mild March morning, they gathered at the hilltop, behind the row of huts they had built, to plan for an organized defense. At that time, a Native American appeared in the distance, walking towards them. Twice they heard him yell out, in broken English, “Welcome, Englishmen!”

That Native American, Samoset, introduced the Pilgrims to his native friend, Squanto, who spoke better English. The Pilgrims’ newest friend introduced them to the local chief, Massasoit, and helped create a peace treaty with him that lasted for more than 40 years.2 Squanto became a devoted friend of the Pilgrims, showing them how to better feed themselves. They learned native fishing and farming techniques and began to use fish heads to fertilize their corn. In fact, historians credit the Massasoit alliance with ensuring the survival of the Plymouth colony.

Or, ponder the good fortunes of George Washington, in what historians call the French and Indian War in the American colonies. As a young 23-year-old Virginian in 1757, Washington accompanied a group of British soldiers to confront the French army garrisoned outside of what is today the city of Pittsburgh. A terrible battle ensued. Washington had two separate horses shot out from underneath him. A bullet went through his hat and five more bullets left holes in his coat, but he was uninjured. Years later, an ailing Native American Chief who was at that battle, asked to meet Washington and his party in the wilderness. According to Washington’s physician, who recorded word for word the remarkable exchange, the elderly Chief said “I am old and will soon be gathered to the great council fire of my fathers in the land of shades… Listen! The Great Spirit protects that man (Washington) and guides his destinies. He will become the chief of nations, and a people yet unborn will hail him as the founder of a mighty empire.”3

Whether one considers events like these, and many others, as coincidence or providence is for them to decide. But in the nearly 230 years of our history since George Washington issued his 1789 Thanksgiving Proclamation, presidents have often recognized the hand of God in our affairs, and that it is appropriate for our government and people to give thanks for the loving Providence that has brought great blessings and prosperity.

In his third Thanksgiving Proclamation, President John F. Kennedy, just weeks before his death, reminded us, “Let us, therefore, proclaim our gratitude to Providence for manifold blessings—let us be humbly thankful for inherited ideals—and let us resolve to share those blessings and those ideals with our fellow human beings throughout the world.”

This Thanksgiving, we invite you to join us as we observe this presidential custom of proclaiming gratitude to Providence for manifold blessings.

1 President James Garfield, our 20th president, died on September 19, 1881 during his first year in office before he might have issued a proclamation.

2 In 2011, the U.S. Mint issued a special design on the reverse of its $1 coin commemorating this treaty between the settlers and the Wampanoag Indians in 1621. See 2011 Native American $1 Coin, U.S. MINT, https://www.usmint.gov/coins/coin-medal-programs/native-american-dollar-coins/2011-wampanoag-nation-alliance-withplymouth-bay