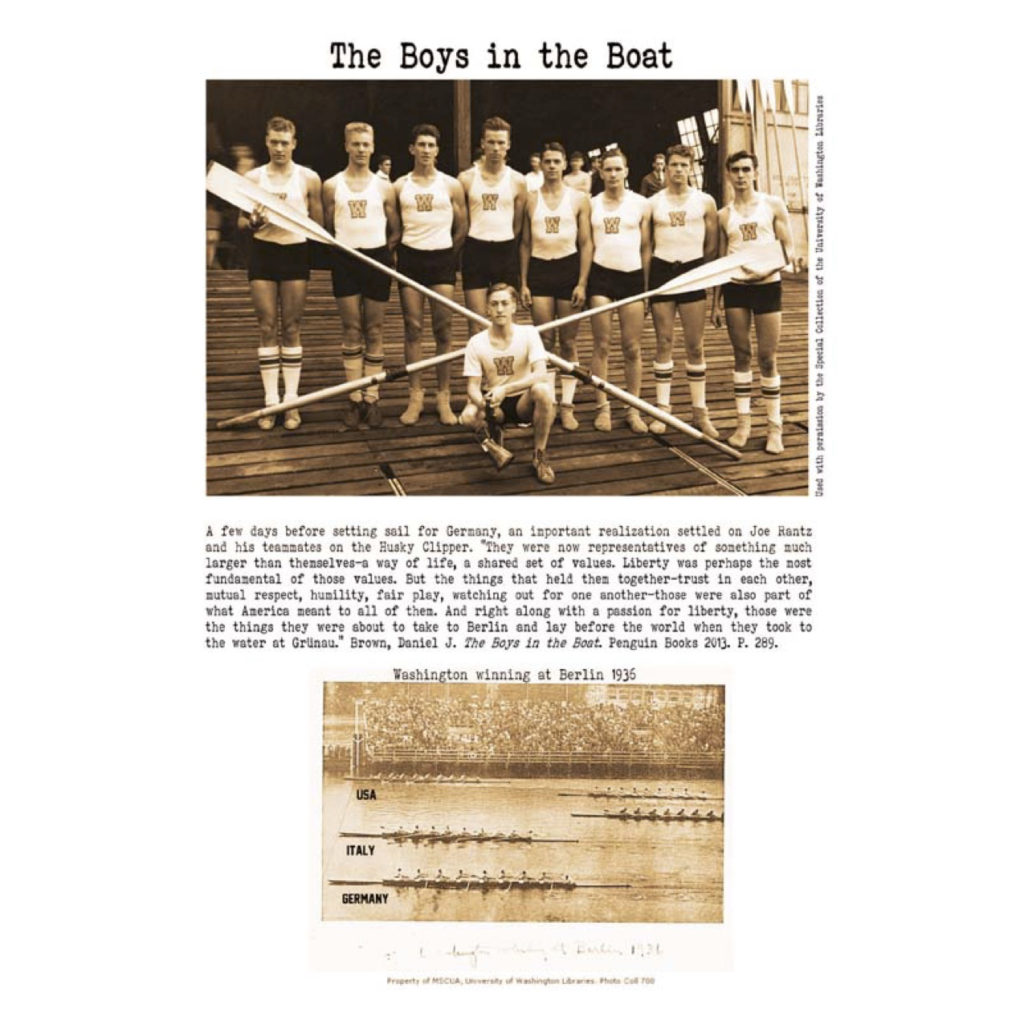 The story of America is unlike any other.

It is the saga of a nation formed and sustained not by might, political alliances, or geographical advantage, but upon the shared ideals of liberty and opportunity pursued with an indomitable spirit. These core convictions run deep in our American character and are so powerful in scope and imagination that neither the mightiest of nations nor the most determined of tyrants has been able to defeat them.

Few stories so vividly illustrate the great soul of the American spirit as The Boys in the Boat. It is the remarkable story of how nine working-class American boys—none older than 21 and all children of the Great Depression—went to the 1936 Olympic Games in Berlin and prevailed against the most sinister and well-orchestrated propaganda machine of all time. There they valiantly rowed their fragile 60-foot shell, the “Husky Clipper,” to a gold medal victory against the best-financed, expertly coached, and well-trained teams the dictatorial regimes of Germany and Italy could produce.

Joe Rantz was one of those remarkable nine Americans. His story in many ways epitomizes the immense difficulties, crushing losses, and relentless challenges of the young men and women who came of age during the Great Depression. Born to a humble farming family, Joe began life in a loving and secure environment. Yet tragic events were about to happen that would stab deeply again and again into his young and innocent heart.

Joe was only four when his mother died an agonizing death from throat cancer. His father eventually remarried a much younger woman, Thula, who displayed little patience or affection for her new stepson, Joe. On a rainy day, when Joe was just 15, his father grimly told him that he, Thula, and the other children would be moving away but that Joe would be left behind. Such adversity might have broken most young boys, but like many of his generation, it only served to strengthen Joe’s sense of self-reliance and will to survive.

Joe was recruited in his senior year of high school by Al Ulbrickson, the legendary varsity crew coach at the University of Washington in Seattle. After so many years of chopping wood, pulling stumps, and working in mining camps, Joe arrived on campus in the fall of 1932 in top physical condition. His freshman team of nine men was quickly immersed in the basics of the crew—synchronizing the dipping of their oars in the water at a precise angle, obeying the barking commands of the coxswain seated at the rear of the boat with a megaphone strapped to his mouth, and most vital of all—learning to think, breathe and row as one. After winning several spectacular championships as freshmen and sophomores, Joe’s crew captured the ultimate trophy in June of 1936—the right to represent America at the Olympic Games in Berlin.

Just as the 1930s were no ordinary time for America, so it was for the Olympics. Adolph Hitler, now Reich Chancellor of Germany, was originally opposed to sponsoring the Games. But his cunning and diabolical Minister of Propaganda, Josef Goebbels, persuaded him otherwise. The games, he argued, presented the ultimate opportunity to showcase to the watching world the all-surpassing virtues, achievements, and glories of Hitler’s Third Reich. It could help establish the superiority of the Aryan race, present the image of a peaceful Germany, and hide their malevolent intentions of world domination and elimination of the Jews—all by presenting pomp and pageantry, unlike anything the world had seen. Despite pressures at home to persuade the U.S. Olympic Committee to boycott the Berlin Olympics, America chose to participate.

The beginning of the gold medal race didn’t start well for Joe Rantz and his teammates. Their chief oarsman, Don Hume, was seriously ill with a lung ailment. The Americans were given the worst lane position for wind waves. Because they failed to hear the starting signal at the beginning of the race, they began in the last place.

The 2000 meter final turned out to be one of the most furious in all of Olympic history. The American team caught up in the last 200 meters. While fanatical crowds shouted for Germany, the boys in the boat reached into their collective soul and nosed just ahead of the Italian and German teams at the finish line. They won gold by just six-tenths of a second. Hitler, enraged and humiliated before all the world, abruptly stood up and stomped off the podium.

On this, the 80th anniversary of this American victory at Berlin, we are thankful for what that success reminds us of. We also salute some of our other outstanding athletes who helped defeat the Nazi propaganda machine—men such as Jesse Owens and Ralph Metcalfe. The triumphs of these young Americans remind us that the greatness of this nation lies not in its wealth, natural resources, or technology, but in our commitment to liberty and opportunity for all. Fueled on by an indomitable spirit that never gives up, we can prevail over any obstacles put in our path.

The events of 1936 also remind us to be thankful for God’s providential blessing on this nation. While Germany succumbed to the brutality of tyranny, and the devastation of total war, America was spared such sorrows. Looking back we can indeed say with the Psalmist, “Blessed is the nation whose God is the Lord…” (Psalm 33:12)