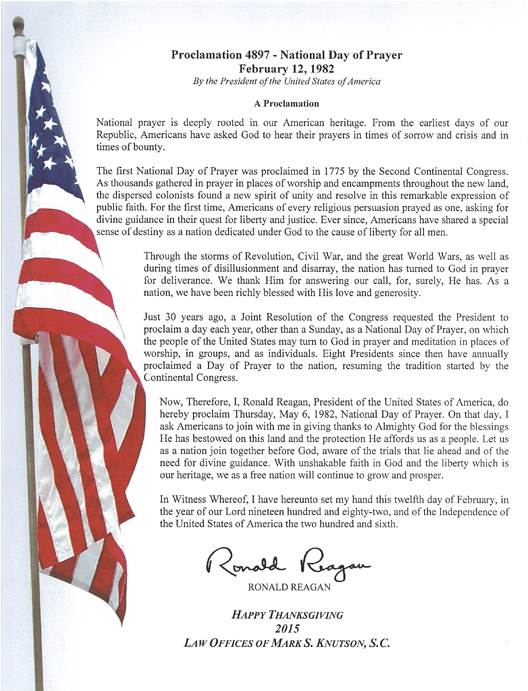 What significant day in our country’s history is almost as old as Thanksgiving and was celebrated for decades on the same day? The answer might surprise you.

It is the National Day of Prayer. For nearly 250 years, Americans of all backgrounds, creeds and faiths have come together to ask the Almighty to intervene in the affairs of our nation and to deliver us in times of peril.

Beginning in 1768, eight years before our Declaration of Independence, the people of Boston called for a day of prayer to protest the stationing of British troops in their city. A few years later, the leaders of Virginia called for a similar day of prayer to deal with the crisis of the Boston Port Act. Thomas Jefferson, a native of Virginia, recalls, “The effect of the day through the whole colony was like a shock of electricity…”

In need of this same surge of divine assistance, the Continental Congress issued a sweeping call to prayer throughout the 13 colonies in July of 1775.  Again, the idea caught on like wildfire.

As war broke out, General George Washington, the Commander in Chief of the Continental Army, realized he was up against an army vastly superior in terms of men, supplies, and experience. He knew victory was all but impossible unless Heaven would intervene. Therefore in March of 1779, he ordered a day for all his troops to be freed from “unnecessary labor” and urged them to pray and fast for God’s help. Three years later, against overwhelming odds, England was defeated and the American nation was born.

President Washington realized that this fragile new nation would not survive unless Divine Providence came to our assistance again. So he boldly called for a united day of Thanksgiving and Prayer for Thursday, November 28, 1789. These two significant events were brought together for national observance.

In March of 1863, with the bloody Civil War entering its third year and no visible end in sight, Abraham Lincoln called for a National Day of Prayer and Fasting. The nation responded and remarkably, just four months later and on the very same day, decisive battles were won at Vicksburg and Gettysburg securing the North’s eventual victory and preservation of the Union.

It would take another war, this time half a globe away on the Korean peninsula, to propel the nation to seek another National Day of Prayer. The year was 1952 and a young evangelist named Billy Graham issued a bold challenge in a worship service on the steps of the Nation’s Capitol, “What a thrilling, glorious thing it would be to see the leaders of our country today kneeling before Almighty God in prayer. What a thrill would sweep this country. What renewed hope and courage would grip the Americans at this hour of peril.” President Truman agreed and with the unanimous consent of Congress, a National Day of Prayer was made into law on the Fourth of July, 1952. Truman’s proclamation explained its purpose “…all of us, in our churches, in our homes, and in our hearts, may beseech God to grant us wisdom to know the course which we should follow, and strength and patience to pursue that course steadfastly.”

In 1982, on the 30th anniversary of the first proclamation by Harry Truman, President Ronald Reagan looked back at the history of the National Day of Prayer and was moved to say, “Through the storms of Revolution, Civil War, and the great World Wars, as well as during times of disillusionment and disarray, the nation has turned to God in prayer for deliverance. We thank Him for answering our call, for, surely, He has. As a nation, we have been richly blessed with His love and generosity.” In 1988 Congress would amend the law to change the observance of the National Day of Prayer to the first Thursday each May.

Looking back, our history suggests that when we, the people of America, have banded together to pray and seek the help of Almighty God, answers have come.

Abraham Lincoln humbly said, “I have been driven many times upon my knees by the overwhelming conviction that I had nowhere else to go.  My own wisdom and that of all about me seemed insufficient for that day.”

This Thanksgiving, let us remember in gratitude that our history has been shaped by regular calls to prayer by our country’s leaders.  Let us also be thankful that whatever our religious beliefs may be, we have the freedom to practice them. The Bible says, “Do not be anxious about anything, but in every situation, by prayer and petition, with thanksgiving, present your requests to God. And the peace of God, which transcends all understanding, will guard your hearts and your minds in Christ Jesus.” (Philippians 4:6-7)

In closing, we are very grateful for the 20 years we’ve been privileged to share a message of Thanksgiving with you.