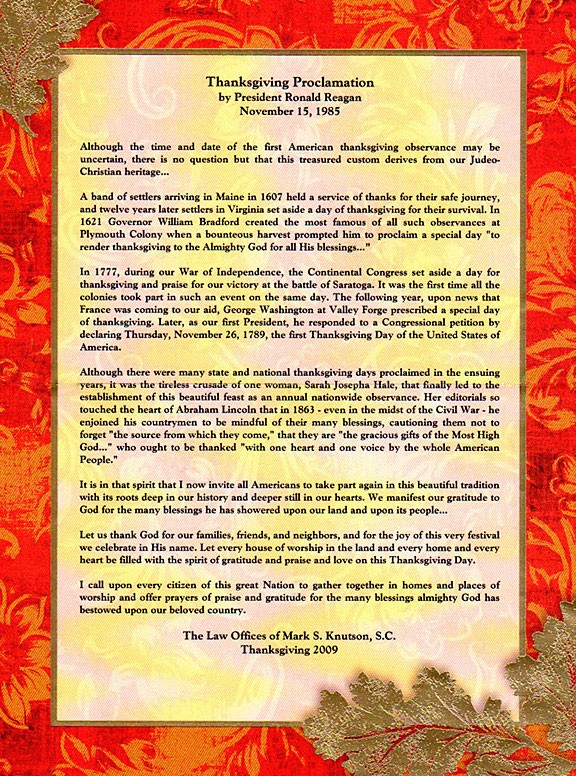 Although the time and date of the first American thanksgiving observance may be uncertain, there is no question but that this treasured custom derives from our Judeo-Christian heritage…

A band of settlers arriving in Maine in 1607 held a service of thanks for their safe journey, and twelve years later settlers in Virginia set aside a day of thanksgiving for their survival. In 1621 Governor William Bradford created the most famous of all such observances at Plymouth Colony when a bounteous harvest prompted him to proclaim a special day “to render thanksgiving to the Almighty God for all His blessings…”

In 1777, during our War of Independence, the Continental Congress set aside a day for thanksgiving and praise for our victory at the battle of Saratoga. It was the first time all the colonies took part in such an event on the same day. The following year, upon news that France was coming to our aid, George Washington at Valley Forge prescribed a special day of thanksgiving. Later, as our first President, he responded to a Congressional petition by declaring Thursday, November 26, 1789, the first Thanksgiving Day of the United States of America.

Although there were many state and national thanksgiving days proclaimed in the ensuing years, it was the tireless crusade of one woman, Sarah Josepha Hale, that finally led to the establishment of this beautiful feast as an annual nationwide observance. Her editorials so touched the heart of Abraham Lincoln that in 1863 – even in the midst of the Civil War – he enjoined his countrymen to be mindful of their many blessings, cautioning them not to forget “the source from which they come,” that they are “the gracious gifts of the Highest God…” who ought to be thanked “with one heart and one voice by the whole American People.”

It is in that spirit that I now invite all Americans to take part again in this beautiful tradition with its roots deep in our history and deeper still in our hearts. We manifest our gratitude to God for the many blessings he has showered upon our land and upon its people…

Let us thank God for our families, friends, and neighbors, and for the joy of this very festival we celebrate in His name. Let every house of worship in the land and every home and every heart be filled with the spirit of gratitude and praise and love on this Thanksgiving Day.

I call upon every citizen of this great Nation to gather together in homes and places of worship and offer prayers of praise and gratitude for the many blessings Almighty God has bestowed upon our beloved country.