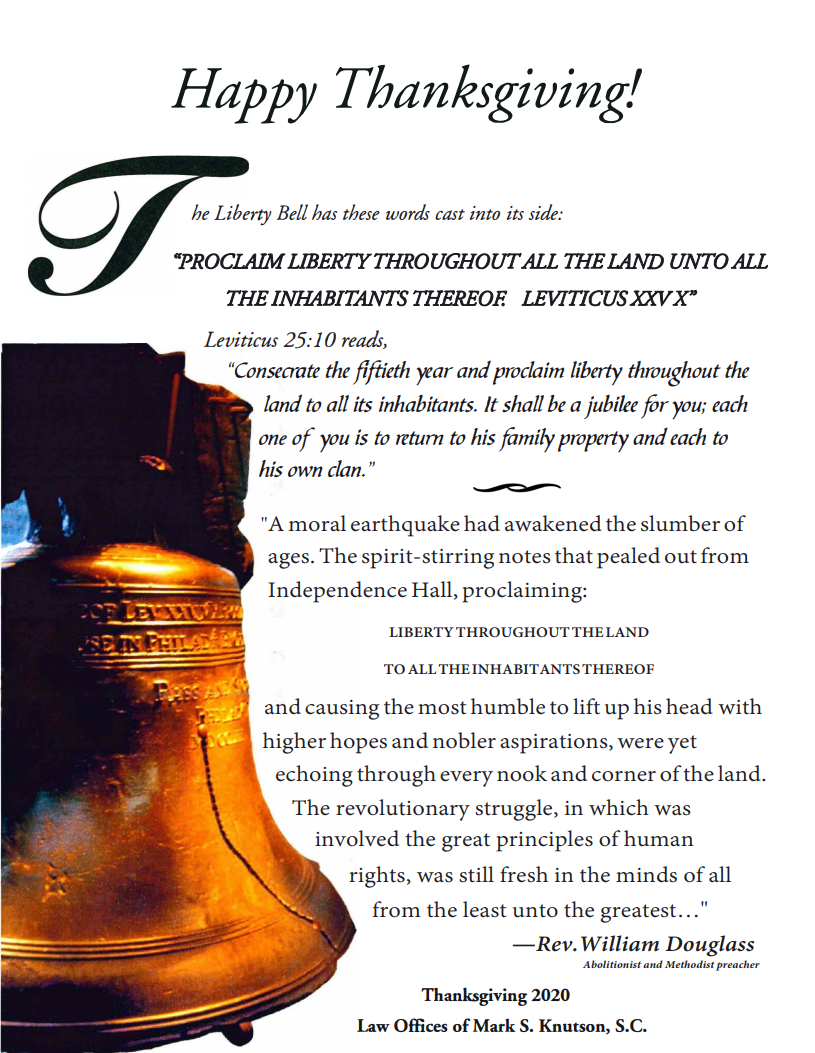 The Liberty Bell is one of the most famous visible symbols of freedom in our Nation’s history.

The Liberty Bell weighs 2,080 pounds, has a diameter of 3 feet 10 inches, is 80% copper and 20% tin and is tuned to an E Old Concert Pitch. Most significantly, it is inscribed with the words of Leviticus 25:10, “Proclaim Liberty Throughout All the Land Unto All the Inhabitants Thereof ”As Charles
M. Boland writes, “It is the most famous bell in the world the most widely traveled bell in the world. . . .”

During this Thanksgiving season, we pause to reflect on the numerous blessings and gifts that are ours as a Nation of free people. And we know of no better way to celebrate the liberties and freedoms that are our birthright as Americans than to consider the magnificent symbolism and enduring message of the Liberty Bell. Its story is more than 250 years old!

In 1751, the Province of Pennsylvania Assembly voted to commemorate the 50th anniversary of “The Charter of Privileges” (first adopted by William Penn in 1701) by commissioning a bell. That remarkable document granted the colonists generous liberties and privileges unheard of in the world they came from. Prior to placing the order for the Liberty Bell from the Whitechapel Foundry in London, a Quaker member of the Pennsylvania Assembly, Isaac Norris, suggested the new Liberty Bell should have this Bible verse inscribed on it, “Proclaim Liberty Throughout All the Land Unto All the Inhabitants Thereof . . . .” The Assembly agreed.

Why were politicians like Norris so willing to allow a verse of Scripture on a public symbol? Like most of America’s earliest thinkers and political architects of freedom, he believed the concept of liberty had its origin in the Bible. Thomas Jefferson said, “The Bible is the cornerstone of liberty.” He explained it this way: “God, who gave us life, gave us liberty. And can the liberties of a nation be thought secure when we have removed their only firm basis, a conviction in the minds of people that these liberties are the gift of God?”

The Liberty Bell arrived in Philadelphia in 1752. It was eventually hung in the steeple of the State House (which later became Independence Hall) in 1753. Unfortunately, the Bell cracked almost immediately and needed to be recast at least two more times. Its most famous day in history was still to come.

That day was July 8, 1776, when the Framers of the Declaration of Independence emerged from Independence Hall to publicly read this history-changing document for the first time. Above them, the Liberty Bell rang out strong and clear, beckoning citizens from all over the City of Philadelphia to hear the news that a new nation had been born: The United States of America. Since then, the echo of the Liberty Bell has rung out both literally and metaphorically as it was irreparably cracked in the early 20th century. However, its resounding message of liberty still rings in the hearts of every American. It has sounded out hope, freedom, and opportunity to oppressed and struggling people everywhere.

Today, we live in a time when differing cultures and perhaps entire civilizations have come into sharp conflict. Sadly, there are those in the world who seek to deprive liberty, freedom of thought and religion, and the right to determine their own future.

Yet this Thanksgiving should give us a reason for rejoicing and celebration. It is a season to remember that God is the author of liberty. The Scriptures are the source of the values and ideals that shaped our nation from the first day the Liberty Bell rang out. These values will strengthen and empower us to overcome the challenges we face at home and abroad. As Dr. Harold White said, “It is a time to return to first principles: work, sacrifice, discipline, patriotic devotion, love of justice, freedom, honesty, high purpose, and respect for the rights of others. These were first and basic principles in the foundation of our nation.”

Join us this Thanksgiving in celebrating the message of the Liberty Bell. It reminds us that our nation’s cherished freedoms and liberties are not rooted in philosophy or politics, but in the enduring truths of the Scriptures. President Franklin D. Roosevelt acknowledged this reality in one of his famous radio addresses to the nation: “We cannot read the history of our rise and development as a nation without reckoning with the place the Bible has occupied in shaping the advances of the Republic Where
we have been truest and most consistent in obeying its precepts, we have attained the greatest measure of contentment and prosperity.”

May the Author of Liberty grant you contentment and prosperity this Thanksgiving season and may liberty continue to ring out loud and strong from this great land to the entire world.