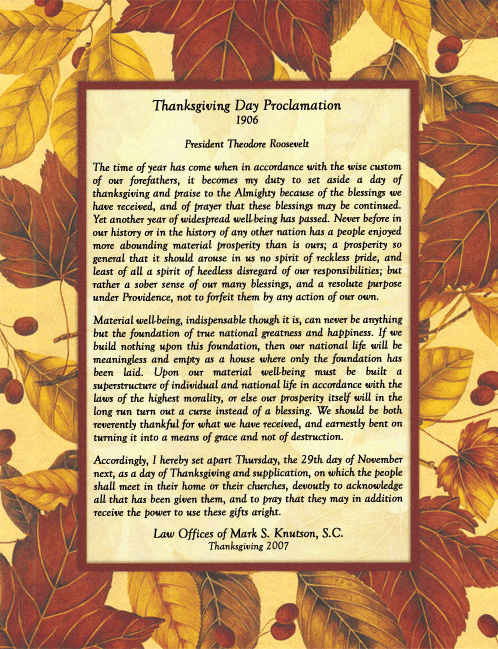 As we are bombarded daily by the political “wisdom” of the presidential candidates about the character of our individual and national life, we all would do well to consider the Thanksgiving thoughts of a man who became President, without being elected to office. He was a man of destiny.

Born to a family of wealth and privilege, he nonetheless struggled with chronic asthma throughout his early life. Encouraged by a wise and loving father to pursue a life of vigor in the outdoors rather than remain a sickly and confined child, he grew in strength and stature. He excelled in athletics at Harvard University.

As a young man, he married the love of his life. Drawn to a life of public service he won election to the New York state legislature. Yet, on one dark and dreadful winter day, he received the news that both his wife had died in childbirth and his beloved mother had succumbed to an illness on the same day. Heartbroken, he sought his solace in the wilderness of the Dakotas where he became a cowboy, bounty hunter, and cattle rancher.

Yet, misfortune and hardship were once again to test his character. A furious prairie blizzard blew in from the Great Plains and destroyed his vast herd of cattle all in one storm – wiping out his entire financial investment. Taking this setback as a sign to return to the world he had left behind back East, he soon journeyed back to New York. There he married once again and returned to his life in the political arena.

He soon received an appointment in the Navy Department where his energy and intelligence caught the attention of his superiors. Just before the tum of the century he donned an Army officer’s uniform and formed his own volunteer regiment- the 1st U.S. Volunteer Cavalry Regiment- a group the world would soon come to know as the celebrated Rough Riders. His leadership of the famed charge up San Juan Hill during the Spanish American War in 1898 became legendary and catapulted his political career to even greater heights.

Returning home he was quickly elected Governor of New York. In 1900 he was invited by President William McKinley to run on the Republican ticket as his vice-president. The two won an impressive victory and the next year he was sworn in as Vice-President at the unprecedented young age of 42. Once again, events far beyond his control were to change his life. When a deranged anarchist fired a bullet that eventually took the life of President McKinley in 1901, Theodore Roosevelt, with little warning, became the 26th President of the United States.

Yet, as history attests, the man and the office were destined to meet. Roosevelt proved to be an energetic and visionary President presiding over the construction of the greatest engineering project in the history of mankind- the Panama Canal. Intensely committed to preserving America’s vast natural forests and wilderness areas, he also set aside millions of acres in what eventually would become the U.S. Park Service.

It was against this impressive backdrop that he paused to reflect on the immense blessings that America had come to enjoy. He wrote in his 1906 Thanksgiving Day Proclamation, “Never before in our history or in the history of any other nation has a people enjoyed more abounding material prosperity than is ours…”

Yet, being a man of wisdom and insight, he saw the potential moral peril such great material prosperity posed to free people. Roosevelt noted, “Upon our material well-being must be built a superstructure of individual and national life in accordance with the laws of the highest morality, or else our prosperity itself will, in the long run, turn out a curse instead of a blessing.”

Teddy Roosevelt had the insight to discern that material blessings remain so only if we possess the necessary character to turn them into a means of generosity. Otherwise, these blessings can undermine our character and devolve into self-focused materialism. As another observer of America said some 170 years ago, “America is not good because it is great; it is great because it is good. And when it ceases being good it will also cease being great.”

Roosevelt, in his Thanksgiving Proclamation, agrees. “Material well-being indispensable though it is, can never be anything but the foundation of true national greatness and happiness. If we build nothing upon this foundation, then our national life will be meaningless and empty as a house where only the foundation has been laid.”

In this season when we give thanks for the great material blessings that are ours we must also pray for the wisdom and character to know how to use them for the good of others and the glory of their Provider. The character of both our individual and national life is revealed in how we use our material prosperity, not in how much we accumulate. If used unwisely or selfishly, our material prosperity can prove our undoing. As Roosevelt puts it, “We should be both reverently thankful for what we have received, and earnestly bent upon turning it into a means of grace and not of destruction.”

Over 100 years ago, our beloved Teddy Roosevelt set apart Thursday, the 29th day of November 1906 as a day of Thanksgiving and supplication on which, “. . . the people shall meet in their home or their churches, devoutly to acknowledge all that has been given them, and to pray that they may in addition receive the power to use these gift aright.” This Thanksgiving may we all take the time to reflect on how immense have been the bounties and blessings heaven has poured upon our land. May we also ask the Almighty anew for the wisdom and compassion to use what we have been given to bless others.